I never really thought of being a bandleader because most of my musical needs were met as a sideman. So the formation of this group was more of a surprise to me than a long held wish. But now that it’s here, I feel blessed to be making my music with this group of people.

The guys:
It felt  natural to have the GAP trio (Guus,Andreas,Pim) as the base of my own group, having known and played with them for 20 years. Their musicality and craftsmanship; Pim with his great sense of swing and sexy grooves and being the musical conscience and Andreas with his distinct sound and way of playing, always seeming to get the right mood for the moment in the music. With their honesty and friendship, they gave me the extra drive and confidence in pursuing my music for this project. Furthermore, there was never a doubt in my mind that my band should have a sax and trombone. One sax player in particular has always been in the back of my mind as I thought of forming a group. Knowing each other since our music studies and playing together in the Clazz Ensemble, Nils, with his characteristic sound and unique way of improvising was this man. Next to such a strong sax player I needed to find an equally strong and sensitive trombone player. Just a few years ago I met just such a young guy on various occasions. Soon after he became a regular member of the Clazz ensemble. Playing with a beautiful tone and almost effortless ease in all kinds of music, abstract or with a hard swing, it struck me that Vincent would be the kind of trombone player I was looking for. So finally in november 2013 I organized the first get together with this group of fine men.

No shows booked at the moment.

My debut cd as a bandleader and composer. The band is called POLDER and the cd bares the same name: “Polder” (2014)

…It is immediately apparent how fresh and clear “Polder”, the debut cd of bassplayer/composer and bandleader Guus Bakker, sounds. With fine details, beautiful balance and a very appealing “live” sound.
With this quintet Guus Bakker creates a multifaceted landscape where cinematic vistas, cut in a dreamy atmosphere by sharp twists and unexpected views, with significant grooves and wide fanning angular patterns. The strong trio of bass, drums and guitar is very beautiful colored by both horns, with a pretty homogenous sound. (Jazzflits 09-02-2015)

It took me a while to figure out what the name of the band should be, but I eventually found several reasons to come to my decision. My first thought was that “Guus Bakker quintet” or “Guus Bakker Group” didn’t do the trick for me, and even though I had written all of the music, most of the arranging was a group effort or found it’s origin during rehearsals in a very democratic way. 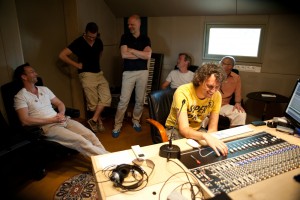 This brought to mind a Dutch expression “Polder-model”, which comes from the 90’s out of the political arena, describing the democratic way of making policy between the Government, employers and unions. My next thoughts were about how the Dutch are world famous for their solutions keeping the water out of the land. For me, one of the most typical Dutch things is therefore a Polder, which makes me think of the low lands, the lines made by the meadows and little canals,  the views and the skies above, which I believe are images that  are reflected in the music. And lastly, as Pim’s studio is situated in Spaanse Polder, Rotterdam, it seemed to me that POLDER was the perfect name for “my” band.

Over the last twenty years I just wrote songs with no particular reason. Well, not entirely true; I’m most productive when I have some kind of reason to write, such as a  project or for a group of people whom I play with. Thats why the oldest song “Dawn” originates from the time I did my Masters in Music exam. “State of Monk” and “November Rains” were written 10 years ago, for a group I tried to form around piano player Harmen Fraanje and violin player Jasper le Clercq. “fOrnette” I wrote for a recording session last year (Ruffsound: a tribute to the music of Ornette Coleman). The rest of the Songs are much more recent. As the thought of my own group became more concrete, I started to write more and rewrite the older songs, so that they would fit the overall concept and the band itself.

But what does it sound like? Well, the best is to listen for yourself and make up your own mind… Whichever atmosphere or picture that each of the compositions provides us, all of the band members look to contribute to the enhancement of those ideas. Capturing and containing that, while still having enough freedom for improvisation is the assignment we tend to give ourselves.

Being a bass player, electric and accoustic equally both, I enjoy playing and listening to all kinds of music, and I guess that eclecticism has to come out somewhere in my compositions. So as I listen to Polder, I hear pop influences seaping through in the music, together with all kinds of jazz music. But as to my main musical inspiration, that would be coming from Dave Holland, Scott Colley and Avishai Cohen.